Question and Answer with Charles Barkley on

The American Century Championship, His Golf Game and The Angora Fire

CHARLES BARKLEY, NBA Hall of Famer and TNT NBA analyst, is the most popular player at the American Century Championship each year. He loves to talk about the tournament (He is playing in his 23rd American Century Championship), his status as a longshot to win (6,000-1), his affinity for the people of Lake Tahoe and his memories of the Angora Fire.

Q: Charles, your thoughts on the NBA Playoffs vs. the Stanley Cup Playoffs. You’ve been outspoken. Is that okay with your NBA people?

A: Well, I make a lot of money, so they can’t fire me.  And I just signed for six more years.  So, they won’t fire me.  So, it’s always amazing when everyone wants you to be honest if they agree with you.  They’re (NBA Playoffs) a dud.  No fan would disagree with that. The Cavaliers and Warriors only lost one game getting to the finals.  That’s not competitive.  It’s been awful so far.  So, I don’t really worry too much about my bosses worrying about me telling the truth.

Our NBA playoffs have not been good.  But, like I say, I’m not worried about getting fired.  As a matter of fact, I hope I get fired because they’ve got to pay me.

People tell you that they want you to be honest, but they really only mean that if they agree with you. We knew seven months ago the Warriors and the Cavaliers were going to play. We said it over the summer it’d be the Cavs and Golden State.  We knew the Cavs were the best team in the east by far.

But there’s not a single person in Nashville that thought the Predators were going to be two games away from a Stanley Cup Championship. That’s what I love about the Stanley Cup Playoffs. And I still can’t believe Washington lost Game 7 at home.  When they won Game 6 in Pittsburgh, I was, like, there’s no way they’re going to lose.

Q: Charles, you shot an 82 at Edgewood Tahoe in the second round of the American Century Championship in 1995.  Would you explain in your own words what’s changed?

A: Well, number one, I want to thank American Century for putting on another amazing tournament this year.  I could speak for all the celebrities, man, it’s the one thing we look forward to every year.  So, special thanks to American Century.

I will tell you one thing, guys, for future advice:  Do not get hypnotized.  I tried to get hypnotized one time.  I got a good nap, but I woke up with the same bad golf swing.  So never fall for the hypnotized thing. 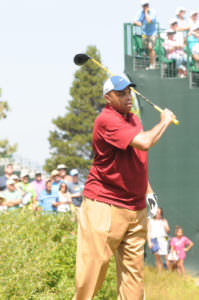 Q: Charles, Justin Timberlake is playing in the American Century Championship for third year in a row. What does he bring to the tournament?

A: You know what’s interesting, I got a call from Justin a few years ago, and he asked me about Lake Tahoe. So, Justin calls me, he says, ‘“How is Lake Tahoe?’  I said, ‘Justin, just come one time and you’ll never miss a tournament again.’”

And he brings so much energy to the tournament.  Number one, his talent, just from a musical standpoint, he’s unbelievable.  But his personality brings so much energy to the tournament, also. And it’s really awesome. Like I say, I give him a lot of credit because you remember last year, he played, flew to Florida to do a concert, and came back in time for his tee time the next day. That’s dedication, man.  And we are very blessed to have Justin as part of the tournament.  He’s just been a big bonus.

Q: Charles, I was wondering if you could just give us an update of the status of your game?  How often you get to play, if that changes during the NBA Playoffs or not?  And have you set any goals for yourself either for this event or for the golf season in general?

A:  Well, I’ve been playing quite a bit now, because once the NBA Playoffs start, you know, we’re stuck in Atlanta for like six weeks.  So, I have nothing to do all day.  So, I’ve been playing quite a bit. As far as my goals, you know, I just want to have fun.  Lake Tahoe is one of the most beautiful places in the world. I get to play with people, great players, great athletes all the time.

So that makes it special.  I have some great relationships.  I’ve gotten to be friends with Kevin Nealon.  We’ve played together the last three or four years. I played with Emmitt Smith a couple times.  It’s always awesome to play with him.  But I don’t really have any goals, man.  Like I say, I really would love to be better at golf.  But as long as I got this nervous twitch, I don’t let it stress me out.  As long as I get to smoke a couple of cigars, I’m pretty content with life just being out there walking around seeing all that beautiful scenery.

Q:  Yourself, Larry the Cable Guy and Kevin Nealon are all 5,000‑to‑1 or higher.  Would you give us a scouting report on Larry and Kevin and which one should we bet on at the Legal Nevada Sports books?

A: I’d probably go with Larry the Cable Guy.

Q: Do the three of you have a side bet?

A: (Chuckling) I actually wish when I was an 8‑handicap and I could actually bet money on myself, I would bet on myself.  I’m not going to lie.

American Century does a fantastic job.  I got to know all those guys from American Century the last amount of years. There’s a couple of guys ‑‑ I look forward to seeing Larry the Cable Guy every year, Kevin Nealon, Willie Robertson from the Duck Dynasty, saw him the last couple of years.  He’s fun just to be around. But you see some guys that you don’t see in your everyday life.  And it’s just like a big family reunion every year.

Q:   We’re coming up on the 10‑year anniversary of the Angora fire.  You were really generous with your philanthropy when that happened.  What was it that touched you about the story out here, what happened with the fire that inspired you and your philanthropy?

A:  Well, what happened was ‑‑ Jon Miller from NBC, who has been a fantastic friend for a long time and I didn’t think it would be fair for us to come up there and play golf and gamble and have fun when a couple of miles away that tragedy had just happened.

So, I went to Jon Miller and I said, ‘Hey, man, can you give me a camera I just want the people to know we don’t just come here to play golf and have fun and they’re suffering.’  And I thank NBC for giving me a camera.  (NBC produced a feature for the broadcast on the impact of the fire and conducted on on-air fundraising campaign to generate funding for relief efforts).

I just wanted them to know we appreciate them rolling out the red carpet, but also, we just can’t come there and play golf and play in their lake and act like something serious hadn’t happened there. So that’s how the whole thing came about.  And I appreciated those people letting me come, because that’s a tough thing.  They were amazing.

(Charles donated $100,000 that year, donated another $90,000 the year after.  There’s a plaque out near the driving range in recognition of Charles Barkley’s involvement in the relief efforts)

Compiled and Edited by Tayah Price