Castagnola’s has been an institution on San Francisco’s Fisherman’s Wharf since its founding as a crab shack in 1916.

Fisherman Tomaso Castagnola introduced his Dungeness Crab Cocktail in 1915 at the San Francisco World’s Fair. A year later, he stepped out of the fishing boat and onto the dock by opening a crab shack, serving fresh fish and cracked crab that he purchased daily off the boats. From that humble beginning, Castagnola’s evolved into the wharf-front restaurant serving crab, fresh fish and hearty steaks and chops. Its cuisine has been recognized by Triple A and other rating groups.

We ventured into the city for lunch before picking up wine from Cass Winery elsewhere in the city (The Paso Robles winery offers Bay Area pick-up parties for wine club members. It was a celebration because the winery had just been recognized for the second time as Central Coast Winery of the Year—nice honor considering there were more than 120 wineries entered).

Our personable Asian waitress, looking at virtually empty dining room, commented they had been slammed on prior weekends with Fleet Week and the Columbus Day parade that ends at the wharf. In addition to the spacious dining room, there is patio seating along Jefferson Street as well as a large square bar in another room. 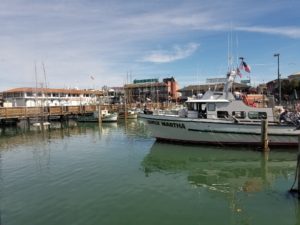 Floor to ceiling windows look out on wharf

Looking at the floor-ceiling windows, we could see other namesake Fisherman’s Wharf institutions—Alioto’s, Tarantino’s, Dom DiMaggio’s all were clustered around the marina.

Castagnolo’s honors its traditions, serving fresh sourdough bread from San Francisco’s Wedemeyer Bakery. We did have a carb-load meal because we just had to enjoy a couple of buttered slices. To start, I ordered a tasty Bloody Mary ($11) made with Tito’s Vodka.

The lunch menu features the sandwiches you would expect (crab, hamburger, tuna melt, chicken) plus bay shrimp or ceviche-stuff avocadoes, fish and chips, and clam chowder and salad. 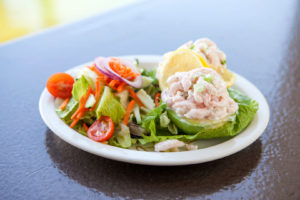 The dinner menu is much broader with entrée salads, a full range of appetizers, the expected fresh fish, crab and lobster, seafood cioppino plus steaks and chicken Marsala and Piccata. The Italian heritage is celebrated across the menu, although there are some nice twists such as blackened swordfish with strawberry mango salsa over risotto.

The crab filling wrapped with sourdough French bread was tasty and a modest luncheon portion. It would have been improved if the bread had been toasted a little longer.

When it comes to the crab cake, served on a hamburger bun, it was carbo-loading to the extreme. The crab was complemented by red peppers, covered with Japanese Panko crumbs and served with a remoulade sauce. 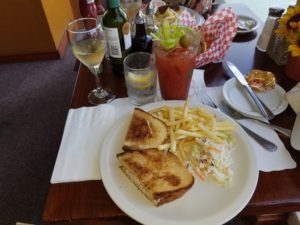 The crab cake would have been sufficient (perhaps served over some greens) without the bun, although the sliced tomato was a nice complement.    My bride finished the crab cake, coleslaw and French fries, opting to leave most the bun.

We opted for a split of Chilean chardonnay to accompany our crab dishes. Castagnola’s house wine, Sycamore Lane, has been produced in the Napa Valley by the same family since 1947. The wine list is set up for a family as well as a business dinner (Silver Oak and Frank Family Cabernet Sauvignons, Twomey Merlot are among the selections).