The Coachella Valley abounds with country clubs that are open for public play.

The Desert Falls Country Club in Palm Desert is one of those courses and has been recognized by Golf Digest. The course is set in an unusual rolling terrain so the 18-hole track has several holes with sharp elevation changes. That’s an unusual feature for a course set in the Coachella Valley.

The designer, Ron Fream, took full advantage of the terrain to design a par 72 course with a rating of 73.7 from the tips at 7,017 yards. The links style course brings water into play on five holes, including No. 1, No. 9, No. 10 and No. 18. No. 1 is not a long hole, but requires an accurate tee shot and then an approach over water to reach the green at the end of the dog leg. 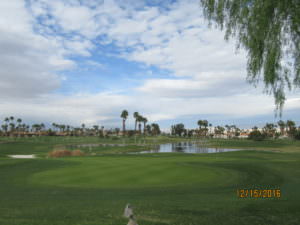 Water is in play on several holes

That’s the end of the water trouble on the front side until you reach No. 9, a 541-yard par 5 that could tempt long hitters to go for the green in two. Doing so requires a second shot over the lake that the hole shares with No. 18.

The backside opens with a 462-yard par 4 with water in play off the tee and down the left side of the fairway on the slight dogleg.

One of the signature holes is No. 14 that plays downhill at 232 yards to an immense 18,000-square-foot green that the club promotes as the largest green west of the Rockies.

The other par 3 on the back plays 146 yards over a pond to green guarded by the water and sand in front as well as sand and water to the side.

One of the more interesting holes is No. 16 that plays uphill and requires an approach shot over a pond that guards the front of the green. It plays 404 yards, while No. 17 and No. 18 are both stern tests. No. 17 plays 455 yards uphill, while No. 18 brings water back into play and tops out at 458 yards.

The course received four stars from Golf Digest in its 2007 “Best Places to Play” rankings and has been voted as one of the top 10 courses in the desert by the Southern California PGA.

When we played it in mid-December, the greens were rolling well and the course was in good shape although the unusual growing season had the Bermuda still growing instead of dormant so the fairways were firm and fast. 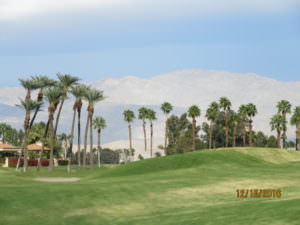 Because of the terrain, players enjoy wonderful vistas of the surrounding mountains. The way talented designers frame holes from the tees with the mountains makes desert golf a delightful visual experience.

Like many of the desert clubs, it features a comfortable clubhouse with a bar and grill (a snack shack serves players at the turn as there’s a beverage cart service on the course). Valet service typically is available for both your car and your clubs.

It is managed by ClubCorp.