Edgewood at Tahoe has long been the crown jewel in the High Sierra golfing world.

The incredible views of Lake Tahoe, highlighted by the final two holes running right along the lake, combine to make it a wonderful round of golf.

Despite the surrounding Stateline casinos and the number of hotel rooms that come with it, if one wanted to be nitpicky about Edgewood, you could point to no lodging facilities being available on the property as a drawback.

You won’t be able to make that argument much longer.

Ground has been broken on a major project that will not only cement Edgewood’s legendary status, but will send it into a galaxy of its own. The Edgewood Lodge is scheduled to be completed by the second quarter of 2017.

The battle to build began back in 2008 when Edgewood started the approval phase. It was not a smooth process in the Tahoe area.

“Developing in the Tahoe basin is difficult to say the least,” said Bryan Davis, the Director of Marketing of Edgewood.

Difficult, but well worth it as when completed, it will be a stunning change for Edgewood. The Lodge, which will be a non-gaming location, will have 154 rooms, a 120-seat restaurant, an 8,000-square-foot spa, a fitness center, a lakefront pool and terrace and a 6,000-square-foot conference center. 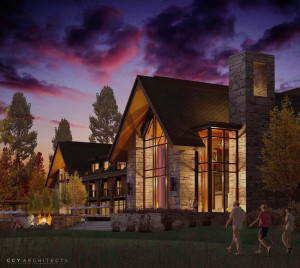 Rendering of the planned Lodge

“I think it pushes us into a destination resort,” said Davis. “This will be not only for the summer, but the winter as well. There will be a lot of people that will choose us for their lodging spot. And they don’t have to leave (after golf).”

In addition to staying right at the course, guests will be very close to the lake, an amenity that sets it apart from the big casino properties located nearby. Just walk out of your room and enjoy the beauty of Lake Tahoe.

“We are right by the water and there’s not many places that can match that,” said Davis. “Having direct access to the beach is a big thing that you can’t do elsewhere.”

Currently the parking for the course is right up along the beach which is a welcome sight for the golfers. However with the new development, the parking will add to the Edgewood experience.

“With the event lawn and the beach, it is going to be so much more,” said Davis. “It’s not going to be just a parking lot.”

In addition, there will be a Private Residence Club with 40 cabins along the 8th and 9th fairways. These cabins will be fractional ownership with golf, mountain and lake views.

The plans do not stop with the lodging. There will plenty of lakefront activities that feature food and beverage service, beach chairs and cabanas, a special event lawn for large groups, and a new pier.

For those wanting to have fun on the water, kayaks and paddle boats will be available.

Because of the construction, there had to be some changes on the golf course. The 9th hole has already been redesigned and now finishes close to the lake, much the same as holes 16, 17 and 18. The 9th hole now plays easier than before and aesthetic pleasure of the green being next to the beach is in full bloom. 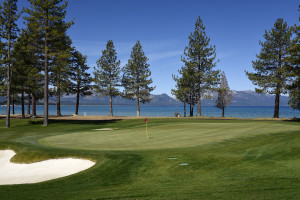 Now with the 9th you step to the tee and you get a great view of the lake and the hole jumps right in there with the last three.”

To create space for the cabins a new green was built for the 8th hole and the fairway was shifted east. “We were at a point where the green on the 8th was ready for a redo,” explained Davis. “Now we have a much larger green with the options for more pin placements. It is a nice fix for the course.”

Finally No. 7 is being redesigned to allow for a new entrance to Edgewood. The new hole will be opened for the 2016 season.

While there is a good amount of construction on-going, the majority of the course is unaffected and remains the pristine mountain course it has always been. In other words, a sensational piece of property is going to be even better.

For more information go to http://www.edgewood.com