Stepping into Lord Fletcher’s in Rancho Mirage is like walking into a heritage restaurant in London.

You are greeted by paintings of Sir Winston Churchill, President Dwight Eisenhower and Prime Minister Margaret Thatcher. That sets the stage for the bar and dining room that are filled with antiques that proprietor Michael Fletcher, son of the founder Ron Fletcher, said his father had collected over the years.

The dining room, which features a large stained – glass window on the northside and a brick fireplace that separates the pub area, is ideal for a quiet dinner. Step into the pub for a bit livelier atmosphere. The pub is where Frank Sinatra liked to dine, as did Lucille Ball. The Chairman of the Board, or Ol’ Blue Eyes, had his regular seat in the bar—his signed photo now hangs over it. 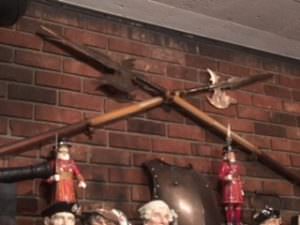 The senior Fletcher selected the art, antiques, etching and English Toby mugs and shipped them from England after scouring the countryside for them.

When Ron Fletcher established the restaurant on Highway 111 more than 60 years ago, there was only one stop sign on the highway between Palm Springs and La Quinta. The gamble of locating it south of downtown Palm Springs has paid off as Lord Fletcher’s became the anchor of what has become restaurant row in Rancho Mirage.

Lord Fletcher’s was recommended to ACES by another second-generation restauranteur in Rancho Mirage, Robert Pigliari of Alberto’s, another Sinatra hangout. Sadly, Alberto’s closed its doors April 1, 2017 after 37 years in Rancho Mirage.

Of course, décor and theme does not a restaurant make. Food and service count and count mightily.

Lord Fletcher’s hits a home run on that score. 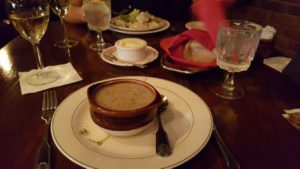 We started our meal with one of the house specialties—the tower of onion rings with a ranch dip. Lightly breaded and cooked perfectly, they were an ideal starter.

They were followed by an even better one—shrimp cocktail. It’s not on the menu. Ask for it. Huge perfectly cooked and cooled shrimp with a tangy cocktail sauce. Wow. One of the best I have ever tasted.

Dinners include soup of the day or salad with the option of a lettuce wedge with blue cheese for $8.75. Despite my fondness for wedges, I opted for the mushroom soup, an excellent choice. 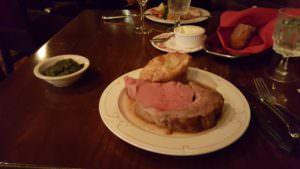 For entrees, I had to go with the specialty of the house—prime rib. That’s rarely my choice—steak would be typical, but I was delighted with the prime rib. The small cut was more than enough and it was mouth-watering. It was accompanied by Yorkshire pudding and the classic creamed spinach.

My bride went for the salmon and loved it.

The menu includes choices that go well beyond the British Isles—ribs, chicken, three fish entrees plus the salmon special; shrimp and pasta; pot roast and short ribs with cabbage; English chicken and dumplings and veal Marsala.

In short, regardless of your preferences, you can find a quality meal here and, with soup or salad included, at a reasonable price for fine dining in the Coachella Valley. 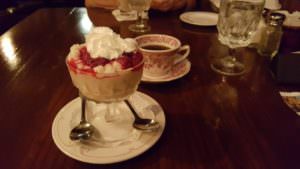 We finished up with dessert—Raspberry Jack for me and a Brandy Alexander for my bride. That was a house choice because it was Frank’s favorite after-dinner drink. He liked the Lord Fletcher’s version so much that he would dine at home or elsewhere and then send a servant to the restaurant for a Brandy Alexander to go.

Bottom line: when you want to step back in time for a British-themed quality meal, put Lord Fletcher’s on the top of your list. Even if you opt for the non-British entrees, you will leave happy.