Located below the Heavenly Valley parking lot on the California side, Himmel Haus serves authentic German food matched with a wide selection of German, Belgian and Dutch beers.

The décor is typical German Bierhaus: communal tables that seat six pushed together in long tables stretching across the dining room. The bar has additional seating, plus a cozy sunken area bordered with couches near one fireplace. There’s also a fireplace in the main room. 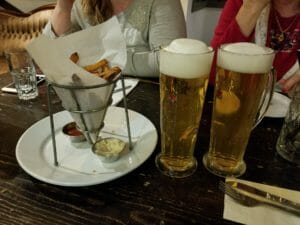 As you would expect, there is a wide selection of imported beers with several on tap as well. The beer menu is the centerpiece on the tables and includes ciders, a limited wine list and non-alcoholic offerings. The restaurant takes pride in serving beers in appropriate glassware so you routinely could see several different glasses at tables—including the giant boot.

We dined there on January 2, just after the busy New Year’s weekend. There was a decent crowd for a Tuesday night, but plenty of available seats. We ended up being served by the hostess who was new in her role. It took a while before she appeared to apologize and take our orders. That was the story of the evening—it was painfully slow. Judging by what we observed, it appears the issue was the kitchen, not the serving team. It took more than an hour before our entrees arrived. Judging by the online ratings, that’s an anomaly.

There are two salads (house and spinach) offered along with Brussel sprouts, a German pretzel and Belgian Frites (twice-fried French fries).

We asked for the pretzel, but were informed that they were out. We opted instead for the tasty Belgian fries that were accompanied by curry ketchup and mayo for dipping. My bride and daughter split the house salad—a good choice because it was huge.  I opted for the ample and tasty pickled beet salad. 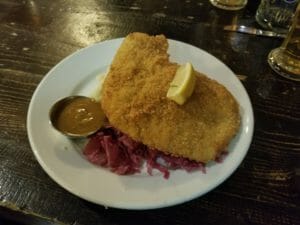 That set the stage for the entrees—huge portions of meat and potatoes complemented by vegetables.

Two of us opted for the pork schnitzel with potatoes and red cabbage. Some of each went back to the hotelroom in the carry-out box.  My bride opted for the roast pork with garlic green beats and mashed potatoes. The green beans were particularly nice, with a smoky flavor reminiscent of Asian cuisine. 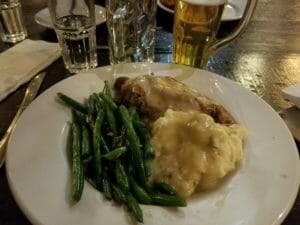 By taking entrees home, we saved some room for the apple strudel with vanilla ice cream, a highlight of the meal. 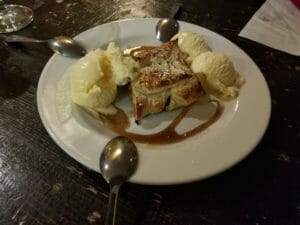 As you would expect in a German restaurant, there are four choices of sausage plates, plus spätzle and cheese spätzle. The management wisely offers half portions of those German favorites.

Himmel Haus is open from noon to midnight or later seven days a week.