When it comes to iconic golf courses and historic resorts, it’s hard to beat the Pinehurst Resort in North Carolina sand country. It dates to 1895.

There’s nine—yes, nine—golf courses to play including the famed Pinehurst No. 2, site of three U.S. Opens including Payne Stewart’s legendary win over a young Phil Mickelson in 1999. The statue of Payne’s fist-pumping celebration overlooks the 18th green. Just five months later, Stewart died in a private jet crash after a malfunction caused everyone aboard to pass out.

Legendary Donald Ross lived at Pinehurst and designed courses Nos. 1 through 4, while other courses were created by George and Tom Fazio, Jack Nicklaus and Rees Jones. 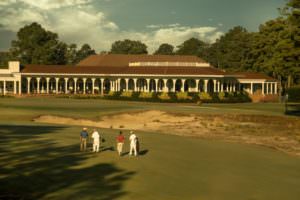 The five oldest golf courses are all served by the historic clubhouse. Plan to spend 20 to 30 minutes or more in the entry hall that serves as a museum. There’s an area devoted to Stewart’s win as well as a bag from the 1951 Ryder Cup and plaques with winners of tournaments held at Pinehurst. The oldest is the North and South men’s and women’s amateur events that date to 1901 and 1903 respectively and are still played at Pinehurst. There’s also a picture of Arnold Palmer and his father, Deacon. Deacon used to take members from the Latrobe Country Club to Pinehurst and Arnold would tag along and play.

Ben Crenshaw and Bill Coore renovated No. 2 back to Ross’ original design in 2011, significantly widening the fairways, eliminating the rough and bordering the fairways with packed sand and wire grass. Cart paths were moved back into the middle of the pine trees. One delightful result is to lose a ball your shot has to be way off target or unlucky.

The crowned turtle-back greens surrounded by bunkers and closely mown areas create a major challenge. Yes, you can use your putter from around the greens, but you better have the speed right or the ball can wind up back at your feet or off the green on the other side.  There also are plenty of bunkers, including some deep ones around the greens. The fairway bunkers border the fairways next to the waste areas.

One helpful local rule is that golfers can ground their club in any sand area—technically there are no bunkers—the rule changes when the USGA is in town. 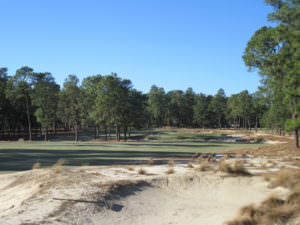 When planning to play Pinehurst No. 2, keep in mind that Donald Ross designed the course to be walked. The resort provides carts with the green fee, but carts must be kept on the sand paths that are well removed from the fairways and the greens.

Our starter, Alan, pointed this out to us and it became clear on the first fairway when I pulled my drive left into the waste area and had to hike back and forth from the cart path. I would have been nearing the green with the same number of steps.

Bottom line: take either a caddie or a forecaddie and walk—caddies are $60 plus tip, while the forecaddie is $30 with a two-player minimum plus tip.

And, as North Carolina native Ben Bridgers, the Director of Golf observed, leaving the cart in the garage and walking the fairways and listening to the chimes ring twice hourly from the Pinehurst Chapel makes for such a peaceful time.

Ross’ design puts the green in view from virtually every tee. The challenge—think caddie—is that the only yardage markers are on the sprinkler heads in the center of the fairways and the pin positions are moved randomly and not charted. All the flags are the same color.

You can see the house that Ross lived in when you approach the third green.

The Pinehurst turf and management team decided when Ben Crenshaw and Bill Coore redesigned and restored No. 2 in 2011, that the resort would move to just two grasses—one on the green and the same Bermuda everywhere else.

Playing in late January on dormant Bermuda fairways (painted a pale shade of green) and dormant Bermuda greens that easily rolled at 10-plus on the Stimp meter, the wise choice is clear. Instead of trying to over seed the courses with winter grasses in the fall (and close the course as they do in the Coachella Valley), they chose to play Bermuda year-round. That means the courses round into prime condition quickly in the early spring and the greens can be effectively managed year-round to maintain excellent playability. 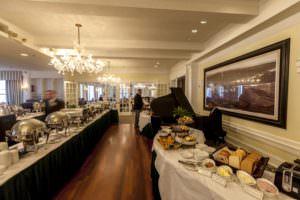 Breakfast buffet at the Carolina

One note on food: if you are staying at the Carolina, it has an amazing breakfast buffet for $29. The buffet offers anything you could desire including a pancake, omelet/egg station; lots of fresh fruit and sweet rolls; fresh biscuits and gravy, grits and choices of sausages and bacon It’s unlikely you can get your money’s worth and be ready to tee off an hour later. Save the buffet for a day when you are teeing later in the day.

The resort has just redone dining options in the clubhouse, adding The Deuce with lunch and small plates from mid-day until dusk. The tables and bar overlook the 18th green of No. 2 and there’s patio dining as well. After our round on No. 2, we enjoyed prime rib chili and crab hush puppy beignets along with bourbon and a craft beer.

The next day, we played No. 4 after about a 30-minute frost hold. The 90-degree rule applied on carts so it was much quicker. Donald Ross designed the course that opened in 1919 and Tom Fazio redid the course in 2000. There is plenty of room off most tees, but it retains the Ross turtle-backed greens surrounded by closely mown areas. Like No. 2, get familiar with your putter and remember just how quick the greens can be. There was more than one hole that I explored both sides of a green with my putter in hand. 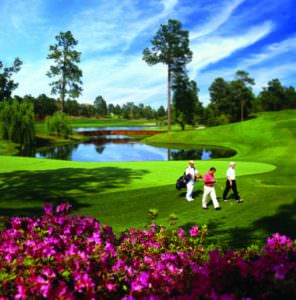 Pinehurst No. 4 4th green in summer 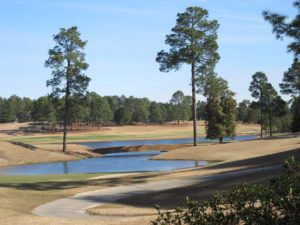 The lake on Pinehurst No. 4 in winter

Three holes play around a lake—two par threes require carrying the water. There’s water only on the 16th hole at No. 2 and it’s barely in play if you hit a reasonable tee shot. If you want to play the Fazio version of No. 4, you need to do it in 2017.

The resort has hired Gil Hanse, who designed the Olympic golf course in Rio de Janeiro, to redo No. 4 starting this fall. It will be similar pattern to the Coore/Crenshaw work on No. 2 with ample fairways bordered by hard packed sand with wire grass. The greens will be redone with the ultra-dwarf Bermuda that is used on No. 2.

Hanse also will design an 8- to 12-hole short course that is scheduled to open this fall.

The redesign of No. 4 likely will be followed by similar changes Nos. 1 and 3 to restore the original features of Ross’ designs.  They will be win-win changes—golfers have responded favorably to the Coore/Crenshaw work on No. 2 and the changes mean less turf to maintain and significant reduction in water.

We also played two modern courses. Pinehurst No. 8 is a Tom Fazio design where he blended a bit from the other courses with his own imprint to celebrate the 100th anniversary of Pinehurst. It opened in 1996. And Pinehurst purchased the private club with a Jack Nicklaus signature course that now is No. 9. 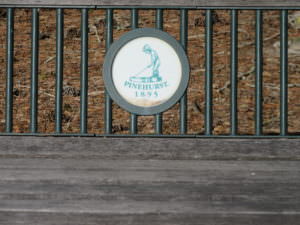 On No. 8, there are the elevated greens surrounded by closely mown areas as well as sandy waste areas. There also are punitively deep bunkers, both fairway and around most greens. Mix in a few forced carries over wetlands and quick greens and it’s quite a test.

There’s also plenty of elevation change and the course feels like a walk in the woods or the pines in the Sand Country. Only a couple of homes are located along the course—set well back and obscured by trees three seasons of the year.

It’s quite tranquil—the golf course and the golfer and it’s one that some players chose to walk with a caddie to savor that experience.

Fazio took advantage of the rolling hills and two abandoned waste lagoons to give a very different feel to most holes. The wetlands are just that and No. 14 requires a forced carry that a golfer can decide how much of the dogleg to saw off.

We found No. 2, a 559-yard Par 5, a daunting hole with a series of fairway bunkers along the right side and wetlands to the left with a narrow fairway snaking between. Pinehurst is fittingly traditional so the only yardage markets are a 150-stake, and fairway markers at 200, 150 and 100 yards.

The local pros suggest that No. 8 is a perfect prep course for Pinehurst No. 2.

The clubhouse is located at the top of the hill with veranda overlooking the 18th and 16th greens. In a warmer season, it would be ideal to enjoy a post-round cool one.

Pinehurst No. 9 came into the portfolio after the 2008-2009 recession wreaked havoc on home sales. It’s a Jack Nicklaus Signature design that operated as a private country club (Pinehurst National) until it was acquired by the resort.

It’s a worthy addition to the family of courses and another modern one that opened in 1989. The first five holes play so difficult that you wonder if Jack woke up on the wrong side of the bed when he designed them. For instance, the par 3 No. 2 requires a forced carry over water that measures 189 from the tips with very little bailout room left.  When you get to the Par 5, fifth, there are two shots that must carry water.

In his later designs, Jack typically built ample landing areas off the tee and then demanded precise second shots to score. This golf course reflects some of the collaboration with Pete Dye, known for his penal courses, earlier in Jack’s design career.

The greens are bent grass so they are a bit slower, at least in the winter, than the other courses.

There are many dining options on site—ranging from the fine dining at the Holly Inn and the Carolina to grill offerings in the historic clubhouse as well as Nos. 8 and 9. The resort clubhouse just opened The Deuce, an expansive grill/bar area, overlooking the 18th green with both patio and inside seating—given the crispy January temperatures we sat inside.

We also ate at the Ryder Club Lounge in the Carolina and enjoyed shrimp and grits in the bar. Very tasty.

We also took advantage of the room service menu at the Carolina that offered a 9-ounce lobster tail—wonderful—as well as a Scottish salmon filet. It was so good the first night that I ordered it again the following night—at $32 for lobster, mashed potatoes and veggies. Love those Carolina prices.

The same goes for the halfway houses on the Pinehurst 1-5 that all start out of the historic clubhouse.

There are the three historic hotels on site as well as condominiums available for rent. Golfers can save significantly by staying and playing in the colder season. The per-person rates for a room in the Holly Inn, the $29 buffet breakfast at the Carolina and golf on any of the eight courses, start at $199 December through February. The surcharge to play No. 2 is $150. The same package tops at $539 during prime spring and fall seasons.

Getting there: The easiest airport to fly into is Raleigh-Durham International, which about is 70 miles from Pinehurst.  The resort offers transfers hourly ($94). Charlotte is a bit further away, will require a rental car and there are more country roads. With the excellent shuttle service, you do not need your own vehicle at the resort. The resort also is partnered with ShipSticks to handle your clubs.

A FINAL THOUGHT: In addition to the price point on food, lots were for sale on the Nicklaus-designed Pinehurst 9 starting at $80,000 with new homes starting at $400,000.