In many instances, being a military Service member puts life and limb on the line.  Upon discharge, joining the veteran ranks often presents even tougher situations to grapple.

That’s where On Course Foundation comes in.  The organization utilizes golf as a recovery and rehabilitation tool for wounded, injured and sick veterans.  It conducts programs coast to coast during which its “members” learn how to play golf and golf business skills for careers in the golf industry.  On Course Foundation then places members in golf jobs with Callaway, Invited (formerly ClubCorp), golf product manufacturers and service providers, and at golf properties.   There are more than 2,000 members in the U.S. and abroad.

On most days, you’ll find him at TPC Harding Park.  That’s where Campbell is incredibly joyous as an Assistant Golf Professional and full-time golf instructor.  And, yes, he was a staffer during the 2020 PGA Championship there.

But golf didn’t enter Campbell’s life until his 13 years of Coast Guard duties ended.  There were no drivers, irons or putters gripped during childhood.  The family TV in Weston, Idaho – 150 miles north of Salt Lake City – wasn’t tuned into Nicklaus, Palmer, Player or Trevino. 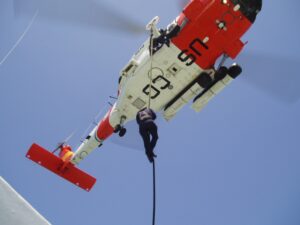 In 2001, Campbell graduated high school and thought of medicine as a career.  However, intrigue from seeing a poster of a Coast Guard member jumping from a helicopter occupied his mind.  Campbell enlisted, the first in his family dedicated to protecting America’s interests.

Fittingly, first up was training as an EMT and paramedic.  Then came quick transport to New York City on 9/11 right after the second tower was hit.  Campbell provided medial triage as well as anti-terrorism security for ships arriving into harbor.

Transfers to San Diego and Long Beach, CA, and assignments in Ecuador, Peru, Columbia and Bahrain, led to critical missions with maritime safety and security at risk.  We’re talking about preempting “bad guys” from engineering major immigration, terrorism and narcotics activities.  A job well done was rewarded with deployment back to New York City as a unit leader.

As the saying goes among military men and women, “home is where America is needed.”  So, it was off to the Arabian Sea.  It’s there Campbell blew his knee jumping from a helicopter.

“It was all in the name of stopping terrorists from blowing up oil platforms,” says Campbell.  “My leg hung by a thread.”  The excruciating pain lasted seemingly forever with effects to this day.  Campbell can’t run, and climbing stairs presents struggle. 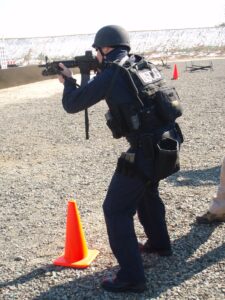 Medically retired from the Coast Guard in 2013, he became angry and lonely.  Time as a civilian was an about face from a decade-plus wearing uniforms.  A deep psychological spiral ensued.  Making matters worse, Campbell went under the knife for a seventh leg surgery.

Oh, no – addiction to Oxycodone and Percocet was a means to a subdued Campbell.  Couch sitting as an output of a pity party caused the scale to tip at 280 pounds, 80 more than military fighting weight.

In a drastic correction move, Campbell’s ex-fiancé hauled him across interstates to an eight-week golf clinic.

“Golf?” questioned Campbell.  “I didn’t know much at all about that.”

How quickly unfamiliarity changes into reality of enjoyment.  It took no time at all for Campbell to desire and actually play daily.  Talk about therapy – obsessive, in a positive way – of the peaceful kind when waling nine or 18 holes amongst nature.

“It was hard to swing a club with a leg as tortured as mine, but persistence paid off.”

Like a gift from the heaven above, Campbell randomly found On Course Foundation online and his personal golf pursuit would personify a rocket ship.  The organization taught him golf playing and golf business skills.  Campbell became a voracious reader of all things golf, and a career choice was made.

On Course Foundation placed Campbell at Sunnyvale Country Club in Scarsdale, NY where he honed people skills and toned down his, well, interpersonal tone required to successfully advance in civilian life.  The organization also played a hand in his move to Ocean Reef Club in South Florida during winters.  Being around golf all day, every day helped Campbell achieve a single-digit handicap that qualified him to teach others how to improve their games.

With aplomb extraordinaire, Campbell wanted to become more educationally well-rounded, earning a B.A. in organizational leadership from Manhattan College.  Armed with greater aptitudes than ever, he sought a position at a golf property with weather fitting for year-round play.  That’s when On Course Foundation placed him as an Assistant Golf Professional and Operations Manager at TPC Harding Park in late 2016.

“On Course Foundation’s care saved my life after I had given up and was numb,” says Campbell.  “It gave me a light in the tunnel as I was sitting in the dark not knowing what to do during my days in deep despair.  If it wasn’t for On Course Foundation, I’m uncertain how happy I’d be.

“All I did – and all other wounded veterans need to do – is send one e-mail to On Course Foundation and it will get you to the promised land with a purpose and give you the itch for golf every day.”

Campbell doesn’t charge veterans for instruction.  “It’s free.  Why put up an economic barrier?  Golf helped me and the least I could do is promote golf to turn around others’ lives.”