Since receiving international recognition for the quality of its wines, the Paso Robles wine region has grown immensely.

We had not visited Paso Robles since the early 1980s, although we remember enjoying Estrella River wines made by Paso pioneer Gary Eberle, who went on to found his own winery. We were struck by the ever-increasing acreage of vineyards—these range from small 5- to 10-acre plots to those covering 100 or more acres. There are now more than 200 wineries in the area and more than 32,000 acres of vineyards—about 10 times more than the Livermore Valley with its 50 wineries.

By comparison, the Napa Valley has about 45,000 acres and 475 wineries, while neighboring Sonoma County has 60,000 acres of vineyards and more than 400 wineries.

The Paso region has exploded in the last 20 years, but there are major challenges at hand as the water table has been significantly lowered by all the wineries pumping to irrigate the grapes. There currently is a moratorium on new agricultural wells—one 300-foot deep Bianchi Winery well has gone dry, while the 1,000-foot one is still working.

At nearby Cass winery, one of the partners said they had one well that was 2,200 feet deep—they used an oil drilling rig to reach the water.

Unlike the Livermore Valley, which imports water from the Delta through the South Bay Aqueduct to recharge the aquifer, there is no outside source of water in Paso Robles—it’s all what falls from the sky and they suffered through another dry year in 2016.

We tasted at five wineries over a bit more than 24 hours on the 4th of July weekend. One notable fact was that a few wineries were growing much more fruit than they could use and were selling their grapes to other producers. That should mean there is lots of great fruit available to other wineries to make quality wines. We saw some of the fruits of that on the wine list at Bistro Laurent (see story here).

We tasted and lingered at Bianchi Winery and Cass Wineries (LINKS) as well as visiting Sculpterra and Hunt Cellars Winery (had to check out the namesake). 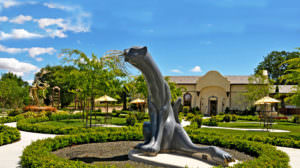 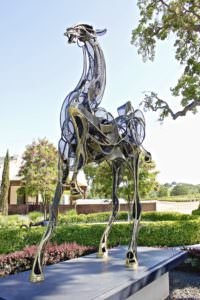 We stopped here first thing Saturday morning on our trip along Linne Road going east. Bianchi winemaker Tom Lane had recommended this stop and we were grateful.

As a guy who would be unlikely to visit a sculpture garden, I was impressed. The sculpture was extraordinary. We went through the entire garden, with more than 20 huge pieces, before we stepped into the winery for tasting.

Winery founder, Dr. Warren Frankel, originally bought the land as a weekend escape from his medical practice in the Los Angeles area. It had an orchard of pistachio trees (nuts are served in the tasting room). Frankel planted a wide variety of grapes on 160 acres (a significant portion of the fruit is sold to other wineries).

The wine is good—the sculpture is striking and huge in the gardens (smaller versions can be found in the tasting room).

Frankel commissioned John Jagger to create a series of magnificent bronze sculptures as well as three in marble. His works are complimented by the magnificent iron works of Bob Bentley displayed in the entry gates and as huge lanterns that adorn the tasting room and chandeliers in the tasting room. 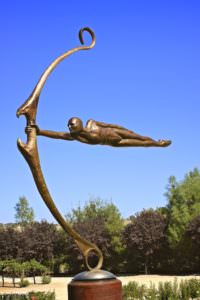 Jagger has passed on and the torch has been passed to Dale Evers whose striking work “Mega Focus” stands in the entry courtyard to the winery.

The winery produces a full range of Rhone varietals as well as reds that range from Cabernet Sauvignon, Cab Franc, Zinfandel and Pinot Noir.

The winery is located at 5015 Linne Road. www.sculpterra.com

The tasting room is located right off Highway 46 west of Highway 101, while the grapes are grown on the 550-acre family estate in Creston. David Hunt had searched throughout the western states for a winery location before choosing the Paso Robles area.

The boutique winery (about 3,000 cases annually) is notable for the way their wines are made and aged. For instance, the tasting menu in July included a 2009 library Meritage of five white Rhone wines, a 2010 Viognier, a 2009 Chardonnay and a 2009 Pinot Noir. There was no wine on the list that day younger than the 2011 Grenache.

Given that most wineries have the current releases of 2014 whites and 2013 reds, Hunt is a throwback reminiscent of the days when Concannon Vineyards in Livermore could do Thanksgiving Weekend barrel tasting with five vintages of Petite Sirah.

We brought home a 2003 Syrah Ruby Port and were very tempted by a superb 2007 Cabovation Estate (Cabernet Sauvignon) at $60 in the tasting room.

The tasting room is located at the intersection of Highway 46 (west) and Oakdale Road.  www.huntcellars.com