The South Course at the Corica Park golf complex in Alameda is certainly a well-known track, as it has been the site of many a great Alameda Commuters event over the years.

But it had also become something else – tired.

That’s not the case any longer as thanks to a wonderful renovation of the course by highly respected designer Rees Jones.

The course has gone from a beat-down municipal course to one that can be mentioned right up there with the best courses in not just the East Bay, but all Northern California.

In 1927, William Park Bell designed the original 18-hole golf course, now known as the Earl Fry North Course. In 1967 the course was partially redesigned by Desmond Muirhead. With tree-lined fairways and water in play on 13 holes, this parkland course has attracted golfers since the first day of golf in Alameda.

The North Course will undergo a new renovation beginning June 25th on the first 9 holes, which is expected to be completed in 2019. The other 9 holes will remain open for play as unlimited golf at a great rate. This will be followed by the second 9-hole remodel in 2019 with an expected opening 2020.

The Jack Clark South Course was originally designed by William Francis Bell in 1957 and was partially redesigned by Robert Muir Graves in 1977. 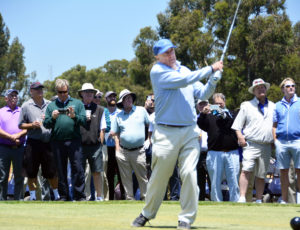 The opening of the new South Course is the culmination of a three-year project under the design hand of Jones in collaboration with Greenway Golf Chief Agromomist Marc Logan. The new South Course offers golfers a chance to experience design elements of the renowned courses of Logan’s home country Australia, like Royal Melbourne and Kingston Heath.

Former PGA Tour professional Bobby Clampett (a private pilot) flew up from Carmel for the Media Day and had high praise for the course.

“Loved the course,” said Clampett. “You could make it tough enough to hold a U.S. Open here. But, it’s also very playable for a 30-handicapper who would have fun. Liked the back nine better and thought it was tougher than the front.”

“I was very impressed. The design was playable, flexible to allow lots of pin locations/lengths, and really fun to play,” said Dunkley. “I thought a number of times throughout the round that this course could easily be a high-end membership course, it’s that good in my opinion.  Hopefully everyone who plays the course appreciates how special it is.  The entire development team did a masterful job.” 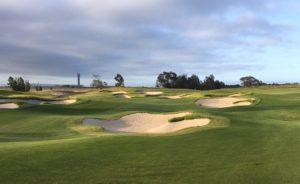 That’s the key to an challenging job of designing a course. It’s fair for the average players who make up the bulk of municipal course golfers but can be still test the single-digit group.

George Kelley, the CEO of Greenway Golf, the managing partner of the course, summed it best at the beginning of Media Day.

“This is not a renovation – this is a new course,” said Kelley.

The course also features some of the narrowest, yet deepest greens I have played.

I was fortunate to play the course with Dan Dibley and Matt Steinmetz of 95.7 The Game. Both have been regulars at the complex throughout the years and were able to offer insight as to how the course had changed with the renovation,

The opening hole sets the tone for the rest of the course. For the sake of the review, all yardages are from the Blue tees. A 504-yard par 5 awaits the golfer to start the round.

The fairway – as is the case throughout the round – seems wide enough to land planes from the nearby Oakland Airport. But while there is ample space for your tee shots, the green is surrounded/protected by several bunkers.

The second and third holes are both par 4’s, playing 356 and 357 yards, but the difference is that No. 3 plays into the prevailing wind and once again, features bunkers throughout.

The fourth hole is the No. 1 handicap hole and at 415 yards, it plays into the wind. That would make the hole tough enough, but throw in the numerous bunkers and it is all you want.

The fifth hole did not appear in the original course according to Dibley and was added with the renovation, capitalizing on an unused area of the property. The 108-yard par 3 is short, but hardly easy with bunkers on both sides of the green. 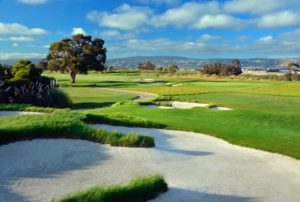 No. 6 plays 484 yards and a par 5. The hole originally featured a lot of trees lining the fairway, but many of those trees have been replaced by bunkers. The 7th comes right back with another par 3, this one playing 163 yards which remains true to the original hole.

The 8th hole is a fun one, with the par 4 playing only 262 yards, but with water, as well as a multitude of bunkers awaiting the tee shot it is anything but a gimme par. This is Kelley’s favorite hole.

The opening nine closes with a 391-yard, par 4 that has the driving range bordering the left side of the hole and bunkers guarding the green.

The 10th is innocent enough at 405 yards, but can be sneaky tough with tee shots needing to avoid water on the right and bunkers on the left.

No. 13 is a short par 4 at 306 yards, but with heavy bunkering from 100 yards in and one of the deepest, narrow greens on the course, it is a test. The green is deep enough that pin placement will change how the hole is played on a regular basis.

The 340-yard, par 4, 14th features a fairway that slopes and as usual, bunkers guarding the green.

The 15th is a par 5 that plays 464 yards and according to Dibley, was the most improved hole on the course. There are bunkers down the left side that could come into play off the tee and running all the way to the green. The hole is reachable in two but requires a big-time golf shot to get home. 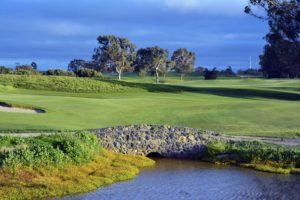 A 147-yard par 3 awaits at No. 16 and is a new hole as well. There is water left and the slopes fall off around the green.

The 17th is a beast of a par 5, playing 559 yards and once again ends with a narrow and deep green that could be a 1-2 club difference on approaches depending on pin placement.

The closing hole is the same layout, but at the same time a vastly different hole according to Dibley. There were no bunkers originally, but now, like throughout the course, it is dotted by bunkers throughout the hole.

The Corica Park South Course is a must-play for golfers of any level. One sign of a quality course is the willingness of someone to drive by other courses from their house to play and that’s the case with Corica Park.

For more information go to www.coricapark.com