Taking Rodney Gorman, a decorated “War Hero” and putting him on national television in the American Century Championship golf tournament at Edgewood in Lake Tahoe could be cause for a bit of nerves.

But for Gorman, after eight tours in Iraq, including one night where he was shot three times during a firefight, a little golf, no regardless of the audience, is not going to faze him.

Gorman, who was awarded a Purple Heart, won the Wounded Warrior Open last October in Texas and as a result, he was awarded a spot in the American Century along with sports and entertainment celebrities.

No big deal, right? At least not when he is on the course.

“I can shut off everything around me,” said Gorman in a phone interview. “I have always been trained to stay focused when there is a lot going on around me. There’s been a lot of things that could go wrong other than a bad golf shot.”

Gorman, who turned 50 in June, is a bit mind-boggled thinking about being a person of focus in the event. 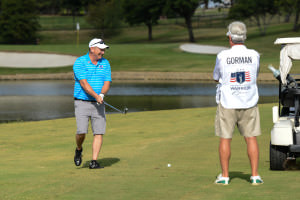 “For me, I spent 20 years trying not pull attention to me,” explained Gorman. “I’ve been living that life so long that is overwhelming that I am in the spotlight.”

Gorman started playing golf in high school in Cut Bank, Montana. He had always been a basketball player, but one day one of his buddies prodded him into playing golf.

“I started as a sophomore,” said Gorman. “One of the guys on the team bet me a keg that I couldn’t make the team.”

He made the team and became somewhat hooked on the game.

“I didn’t know much about (golf), but I could hit it a long way,” said Gorman.

Gorman went straight to the Army out of high school and served until 1987 and golf entered the equation again.

“I self-taught myself – there wasn’t a lot to do in Cut Bank,” said Gorman with a laugh.

He spent some time in Cut Bank and married his wife Michelle, but after seeing the world as a soldier, he opted to re-enlist. It was his time in the service that formulated his outlook on life.

“There was a saying we had heard,” said Gorman. “To whom much is given, much is expected.”

Gorman knew there was much danger in going back into the service, but embracing the heart of the saying, he went back to battle. One night in 2005 he was shot the three times, once in the arm, once in the pelvis and once in the big toe. He went through more than 40 surgeries for the injuries.

He retired from the service in 2011, but still remains active in working with both Special Operation Forces and teaching “close quarters battle” to SWAT teams from around the country.

It was also in 2011 when he was pretty heavily back into the game of golf. Now there were obviously there were adjustments to make. 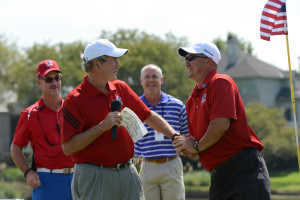 “My body wasn’t working like it used to,” explained Gorman. “I couldn’t feel my right hand so it was tough trying to get my timing down.”

But once he had committed to playing golf, Gorman jumped in and with the advent of technology in golf gear, he made strides.

“The equipment was a lot better and I started getting my feeling,” said Gorman. “I learned to putt. I used to miss the green on purpose so I wouldn’t have to putt. It used to be from 6 feet, it was a guaranteed two-putt.”

His game improved to the point where he decided to enter the Warrior Open, a 36-holf tournament for men and women that served and sacrificed to defend the United States. Gorman had other motives for playing, like wanting to meet former President George W. Bush.

He did more than that, shooting 72-73, good enough for the win over defending champion Chad Pfeifer. Pfeifer also will be playing in the American Century this year.

“I knew I had a good game going in,” said Gorman of the tournament. “After the first day, I knew the course was good for my game.”

The win got him a spot in Lake Tahoe and the family is going make the most of it. Rodney and Michelle rented a condo for the week of the tournament and along with his sons Scott (24) and Travis (15), Michelle’s father will be joining them.

“We are going to have fun,” said Gorman, who said Travis was looking forward to meeting former 49ers quarterback Alex Smith at the event. “It’s an awesome opportunity. This a chance for me to meet a lot of other golfers.”

Gorman is not the guy who will be the most recognized by the fans, but he and Pfeifer will deservedly be the most respected and admired players in the field