There’s lots more to the nine-hole Old Brockway Golf Course than the glimpses of the fairways you see driving by on Highway 267 in Kings Beach.

The first two holes of the historic course run along the highway that connects Kings Beach on the north shore of Lake Tahoe with Truckee, the gateway on Interstate 80. Once you finish the first two holes, you head into the towering Jeffrey Pines and cars, houses and noise fades as the course wends around the woods.

The only dwelling you see is the home of the owners, Lane and Helen Lewis, on the fourth fairway. It’s the rare family-owned and operated course and has been since 1978. You’ll likely meet Lane when you check in as he greets many regulars by name. 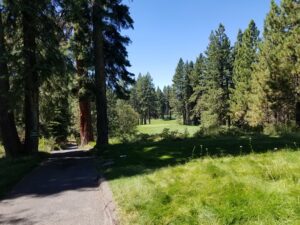 View from No 8 tee

When we played on a late August day, it was perfect weather (near 80 degrees with a light breeze coming off Lake Tahoe) and the course was in splendid shape. Do take in the lake and mountain views looking back up the first fairway, because once you turn left into the woods, there are no vistas and nothing but forest for five holes.

There is plenty of green grass on the par 4s and par 5s so it’s easy to stay out of the woods, although you can find yourself playing from the rough that borders the relatively narrow fairways. Find the rough and it will stop your drive quickly. The elevation is 6,240 so you will welcome the extra carry from the elevation.

Many greens are elevated and small so accuracy with the irons is paramount. It was built by Harry Comstock and designed by renowned Scottish architect John Duncan Dunn. He also designed Shinnecock Hills on Long Island, site of five U.S. Opens including the 2018 event.

Our playing partner, Barbara, is a long-time resident of Incline Village, which has two public golf courses. She buys a season pass to Old Brockway and plays twice a week there. She likes the course because she can walk it—something we saw several people doing although carts also are available. The first two holes and the last two are pretty flat, but there’s good elevation change on the par 3s and the holes through the forest.

Old Brockway has a rich history dating back to the days when the CalNeva resort was humming and drew entertainers such as Bing Crosby, Bob Hope, Frank Sinatra and Dean Martin. A photo of a young Dean hangs in the pro shop.  President Dwight Eisenhower also walked the fairways. 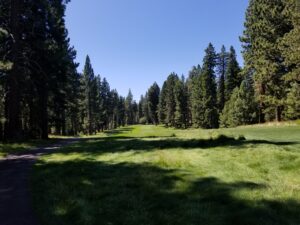 Crosby held his first two golf tournaments at Old Brockway in 1934 and 1935. From these mountain beginnings, it eventually moved to the Monterey Peninsula as the “Crosby Clambake” and now is the AT&T National Pro-Am.

In contrast to many mountain courses that opened later than normal because of the heavy and late snowfall, Old Brockway opened on April 26 and typically stays open until Thanksgiving. In late snow years, the course has operated until Christmas. Lane explained that it’s located in a Tahoe “banana belt” that allows the long season.

Green fees are $45 with carts available for $20 for nine holes from July 1 to Sept. 15. It’s $75 to play 18, a good option if you have the time. The family atmosphere creates a relaxed vibe. Hole No. 9 finishes next to the parking lot so there’s no issue taking the cart to your car before the round as well.

There’s also a full driving range to tune up your game. 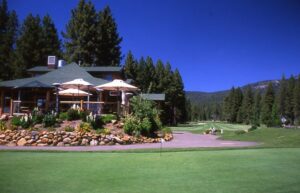 Dining is available throughout the day

The Lewis family owns the historic building that houses the pro shop plus Spindleshanks Restaurant, that offers dining on the deck overlooking the first tee. It’s open all day so you can grab breakfast before your round or play a twilight round and then enjoy dinner without moving your car.

Old Brockway is located at 400 Brassie Ave. in Kings Beach, the next turn on 28 after the roundabout with highways 28 and 267.