Sir Nick Faldo brought his skill as a course designer to the United States for the first time when he designed the Shadow Ridge resort course in Palm Desert.

The course is the centerpiece of the sprawling Marriott timeshare development at Shadow Ridge. Many holes on the back nine are bordered by three-story timeshare condos that enjoy views of the course as well as the Santa Rosa Mountains in the background. The front side runs through the desert where presumably Marriott plans to build additional units. 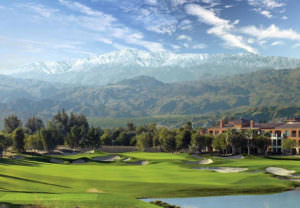 Water comes into play off No. 10 tee

Sr. Nick, according to the web site, drew inspiration from the sand-belt courses in Australia. He is quoted as saying, “The fairways are typically generous, but our bunkering style is impressively bold.”

There are ample landing areas on most of the other courses except for the par 3s.

Water comes into play on four holes plus the creek that guards the 18th green. Faldo made up for the relative lack of water hazards with bunkers around the greens as well as in key fairway locations.

Playing in mid-December, the course was in wonderful shape. It had been open for six weeks since the fall overseeding. 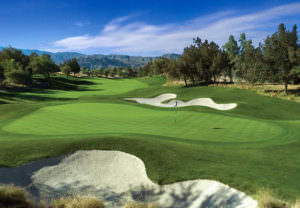 Faldo’s design focused on the green complexes with deep bunkers and very few places to simply run the ball onto the putting surface. The greens have plenty of contour. If you find yourself above the hole, good luck stopping the ball. They were rolling very quickly—I was consistently blowing putts by the hole that I had cozied up the day before at Escena, another course known for its quick greens.
On a few holes from the tee, the bunkers seem to be located beside the greens. When you get to the green area you find that the bunker is 20 to 30 yards short of the putting surface. That means a ball in those bunkers requires a tough long bunker shot to find the green.

This would be a great golf course to play two or three times in a row so you can get a feel for where you want to land the ball on the greens. The carts are equipped with a smaller version of GPS (about the size of an Amazon Kindle) that works very well in sunlight and gives all the information you need. The starter recommended using the GPS instead of the free Shadow Ridge app that also has a GPS feature. 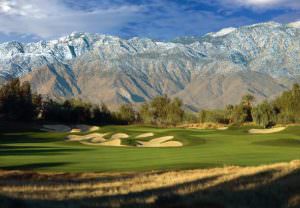 The track has received plenty of accolades as a top resort course and one of the best publicly accessible courses from various golf publications. They are well deserved.

The course also features wonderful vistas of both the Santa Rosa and San Jacinto mountains.

The golf course is complemented by a fully stocked pro shop, a grill in the clubhouse as well as a snack shack and a beverage cart.  http://www.marriott.com/golf-hotels/ctdsr-marriotts-shadow-ridge-i-the-villages/shadow-ridge/5224671/home-page.mi