The sheer beauty of the Napa Valley is evident in so many places as you go from Napa up through Calistoga.

Arguably, one of the top vistas comes with the drive out to Stags’ Leap. As you head out of the Silverado Trail, you drive into a stunning valley. The beauty is such that we stopped the car to take pictures before we arrived at the winery. 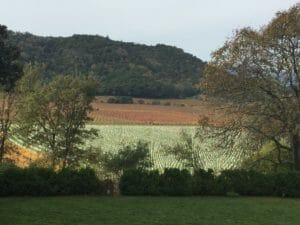 It’s the type of setting you could see being used in movies or TV – actually it was used for scenes in the 1980’s TV show Falcon Crest.

But while you soak in the vision of beauty, you can’t help but think how close it came to being taken away. The devastating wild fires that ravaged the area came close, very close to Stags’ Leap.

In fact, the winery did lose a couple buildings and the fire did come feet away from the winery building. If not for the heroic efforts of the first responders, the loss would have been devastating to the historic winery.

According to Senior Hospitality Manager Tammy White- our incredible hostess for the visit – a winery employee rushed out to the winery after learning of the fires.

He saw three fire trucks by a neighboring winery and got one of the three to come with him to Stags’ Leap. The firefighters made a valiant effort, saving almost all the property. 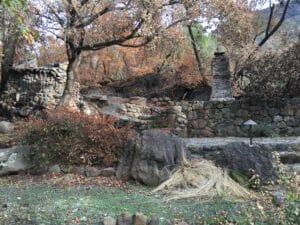 Remains of a cottage

Knowing – and seeing – how close the fires came to the facility provides an eerie feeling, but also one of relief. The history of the winery is fascinating.

The Stags Leap name originated in the late 1880s with the founding Chase family, and is attributed to a native Wappo legend of a stag leaping to escape hunters.

Estate Founder Horace Chase partnered with his uncle, W. W. Thompson, on land where grapes had been planted in the 1880s.

The construction of the Manor House in 1890 was followed by the blasting of the Historic Wine Cave and first vintage in 1893. By 1895 production on the estate was up to 40,000 gallons of wine.

Wine production has been interrupted periodically since the first Chase vintage due to financial reversals, Prohibition, and war; however, wine grapes have been grown continuously on the estate since its founding.

A fashionable country resort in the mid-twentieth century (the Grange Era), popular with Hollywood due to its 1890s stone Manor House and historic gardens, legends of bootleggers and gangsters, ghosts and gypsies, Stags’ Leap has been home to three major family groups up through the modern revitalization of the winery that began in the 1970s.

During the time when the winery was closed, the Stag’s Leap Cellars opened, posing a problem once Carl Doumani purchased the property and opened the doors for a winery again.

Following a 13-year court battle, it was decided when the judge sat both parties down and decided that the original winery would be known as Stags’ Leap and the newer Stag’s Leap. Yep, it’s one space with the apostrophe.

What’s Stags’ Leap is now a testament to the Roaring 20’s mixed with modern excellence.

The porch outside the Manor House is current, yet a toss back to another era. It’s easy to visualize the Great Gatsby-type parties that took place. Right off the porch is a downstairs area that served as a speakeasy during prohibition. 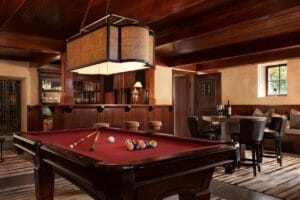 Furnished with comfortable seating, a pool table and a bar, the room can be reserved by wine club members and is used for private parties.

Think man-cave at a winery!

Now, let’s get to the wine – a testament to the excellence of winemaker Christophe Paubert.

Every wine we tasted was awesome. Our group has diverse tastes, but this was one of the times to a person we agreed – the wine is as spectacular as the property.

We started with the 2016 Viognier, a wine that is usually used in blends, frequently to soften some red wines. This one was very enjoyable, and would be refreshing to drink on a warm day.

The 2014 Barrel Selection Chardonnay was up next. This is a small bottling of the most expressive barrel lots in each vintage. Crisp and tasty is a good way to describe this wine.

The Stags Leap AVA – yes there is a third way to spell Stags Leap – is known for Cabernet Sauvignon and the Leap Estate Cab is a testament to the quality of wine produced in the region.

Sourced from Cabernet Sauvignon blocks within the Stags’ Leap Estates vineyards, the wine was everything I look for from a Napa Valley Cab.

Lost in the excitement of being in one of the top Cab regions in the world, there are other exceptional reds produced in the region.

The last two wines we tasted brought this front and center. There were a pair of Petite Sirah’s we were privileged to taste. The first was the white label, Napa Valley Petite Sirah. Made from grapes from throughout the region the wine was a joy to taste. 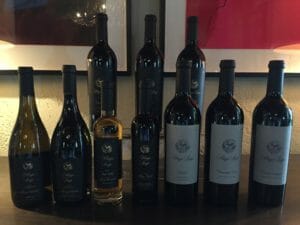 We did not expect what was coming next. The Ne Cede Malis Estate Petite Sirah features a black label on the bottle. Ne Cede Malis comes from the Latin phrase “Don’t give in to misfortune,” the family motto of the Chase family. Sourced from the oldest block on the property the wine was my favorite of the impressive lot.

According to White, it is the iconic wine for Stags’ Leap and it was easy to see why.

Often the glitz or beauty of winery is better than the wine itself. At Stags’ Leap, you get the best of both worlds – a legendary winery with wines that set a standard for others in the region.

If you have not visited Stags’ Leap, make a point of doing so in one of your coming visits to the Napa Valley. You’ll be able to experience the beauty of the land in conjunction with world class wines.

It’s appointment only and for more information go to www.stagsleap.com.