The Bay Area lost its oldest municipal golf course when the city of Vallejo closed the Mare Island Golf Club.

The original nine holes dated to 1892 making it possibly the oldest golf course west of the Mississippi River. It was built for the naval base at Mare Island. The base closed in 1996 and jurisdiction transferred to the city of Vallejo.

The city added a second nine in 2000-01, but play never reached the levels that the city management expected. The course was characterized by great views of the Bay and the surrounding areas. After the closure in February, Vallejo placed the 170 acres were put on the market for $4.75 million and accepted an offer from the Nimitz Group for potential residential development.

Vallejo also owns the two 18-hole layouts at Blue Rock Springs that it noted required a $4 million public subsidy to operate from 2011-2017. Eager to escape from the subsidy, the city requested proposals and has entered into an exclusive agreement with the Greg Norman Co. In the request for proposals, it noted that rounds had dropped 56 percent since 1999. 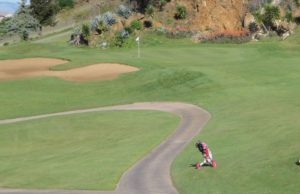 The request also noted all of the Northern California golf courses that had closed since 2016—nine in total, including the 36-holes at Sunol and 18 of the 36 at Diablo Grande in Patterson.

Earlier this year, the Norman firm presented an 18-hole design for a Greg Norman Signature course plus a short course, a practice area and a new clubhouse/community center.

The economic driver on the 225-acre parcel is 615 homes that would range from executive-level in a private community to more affordable options. The plan calls for 97 acres of residential that will enable the investment in the best 18 holes of the golf course and the new clubhouse. Norman has partnered with Lewis Management Corp. for the residential communities.

After three community meetings, the Norman firm was to submit a  variety of documents for city review in July. A fourth community meeting is scheduled for September as is City Council review and potential approval of the sales documents.

If it moves ahead, entitlements will be on the council agenda before the end of the year with construction scheduled for May 2021. Stay tuned, there’s a long way to go.

Both courses remain open for daily play and there’s also the well-regarded Hiddenbrooke Golf Club, an Arnold Palmer design, nearby.