Pleasanton residents and visitors looking for Italian food have been fortunate to choose from three restaurants located a stone’s throw apart on Main Street.

The oldest is Pastas Trattoria, a family-owned establishment that opened in 1998. Across the street and half a block up is Chianti Riserva that opened more than seven years ago when two brothers brought their culinary skills from San Mateo to Pleasanton. The newcomer is Locando Amafli, part of a growing East Bay chain with locations in Lafayette and Danville and a wine bar in Livermore. It filled the vacant space that formerly was Fontina. 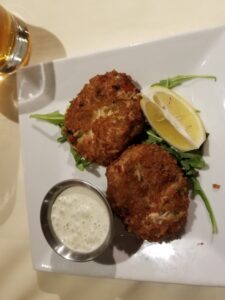 The three all offer Italian food from different regions and traditions, but you can’t go wrong at any of them.

We dined at Pastas on Valentine Day’s weekend so there were special additions to the menu such as steak and lobster, halibut, steak Diane, and a bone-in ribeye. They were tempting, but we decided to stick with the traditional Italian offerings.

We started with Fried Calamari and Crab Cakes with Dill Remoulade. The two large crab cakes were wonderful, filled with lots of meat and minimal breading or filler. They were one of the highlights of the meal with the dill sauce complementing them perfectly. The lightly breaded calamari was served with two dipping sauces, a marinara and a zippy white sauce that finished with spike of pepper. There was plenty to share of both starters. 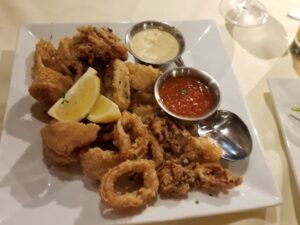 It offers the traditional minestrone soup as well as five different salads ranging from the expected Caesars to a fall salad or an iceberg wedge. Meat entrees are limited to filet mignon and beef short rib that also is offered in a ravioli. There are several pasta choices. My bride selected the Penne Alla Vodka with grilled salmon & prawns, bacon, fennel & spinach in a spicy vodka marinara sauce. She loved it. A perfectly cooked salmon filet and two jumbo shrimp were laid over the pasta.

I choose the Bolognese ragu of pork & beef over wide pappardelle pasta and topped with a generous spoonful of ricotta. Mixing the cheese into the sauce gave it a nice spin. As you would expect, particularly given the two starters, about half of each entre went home for lunch the next day. 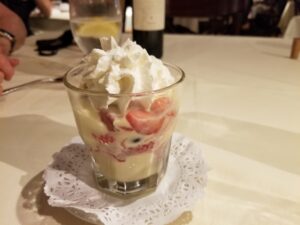 That saved room for dessert, a good call, because Pastas offers Zabaglione, a light Italian custard, served with fresh berries and topped with whipped cream. It was a perfect way to finish a good meal.

The wine list is heavy with the expected Napa Valley and Sonoma brands such as Jordan, Grgich and Heitz. The only Livermore Valley wine is Wente’s Riva Ranch Chardonnay priced handsomely high at $52 bottle, $8 more than the Russian River Ranch from Sonoma Cutrer. I wonder how much they sell of the Wente given that it’s routinely available at Safeway or Costco for $13-14.