Tucked away on the edge of a neighborhood overlooking a state park is a destination fine dining location and inn: The Blue Boar Inn and Restaurant in Midway, UT.

The owners, John and Mara Warnock, are natives of Utah and purchased an existing property in 1999. They set about transforming it into an European-style destination in the Heber Valley. The 12 rooms are complimented by extensive imported decorations. There are crossbows dating to the Middle Ages, a 12-foot Alpine horn and a huge porcelain heating stove—all imported from Europe. The main dining room is overseen by the expected stuffed boar’s head. 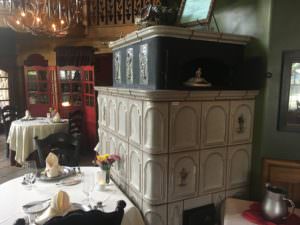 The cozy Truffle Hollow Pub features a hard-carved bar made from a huge antique steamer trunk. The Blue Boar team, judging by photos from the 2002 Olympics where the biathlon was held a few miles down the road at Solider Hollow, is avid supporters. There’s also an extensive collection of Olympic pins gathered over several Games.

It’s worth stopping by for a drink just to see the extensive antiques, but that would be selling yourself way short. Do enjoy a meal there. General Manager and Chef Eric May serves three meals daily to accommodate the lodging guests with breakfast. With two Wasatch State Park golf courses nearby, the extensive patio also is a favorite post-round stop for the golfers—a different kind of 19th hole. 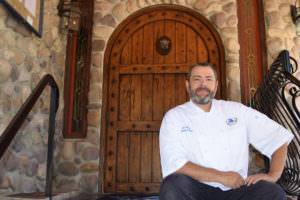 Chef May’s menu features locally sourced ingredients whenever possible, but he also will go elsewhere for the proper ingredients for his menu. He delights in using herbs from the inn’s garden.  He’s been the chef for 11 years and general manager for 3 ½ years.

Dining early on a Thursday evening (the rush arrived an hour later), we enjoyed a tasting menu prepared by Eric and matched with wines by the glass from the restaurant’s extensive wine list. The list includes plenty of Napa Valley choices, but also had wines from Washington, New Zealand, Germany, France, and Italy. 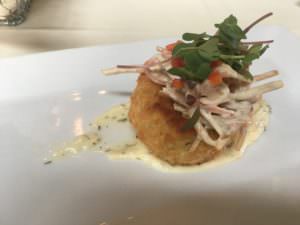 We started with a perfectly seared scallop topped with tiny greens atop a dollop of jelly. It was paired with a flute of Korbel sparkling wine. Eric then followed with a thick, wonderful jumbo lump crab cake ($18) with a Celeriac Remoulade. 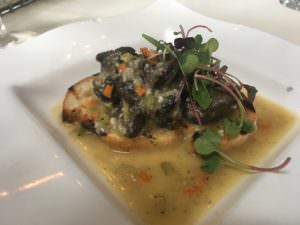 The second appetizer was a surprise: slow-cooked Escargot ($12) served with the traditional garlic butter and Mirepoix (diced slow-cooked vegetables) on top of a grilled slice of sourdough bread (the European-style breads are baked fresh daily). The Escargot were cooked for four hours and were remarkably tender. The sauce was so tasty we were mopping it up with other slices of bread. 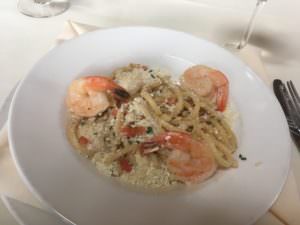 We then moved on to our first entrée—Shrimp Mizithra. Perfectly cooked shrimp topped the thick Bucatini noodles (about five times thicker than spaghetti) that had been tossed with crumbles of Mizithra, a dry Greek cheese. It was brought together with a Beurre Noisette (brown butter sauce). We were enjoying split portions and almost took some home—it was tasting and filling. Eric paired it with a crisp New Zealand Sauvignon Blanc that complimented it perfectly.

Finishing up the entrees was a rack of lamb with smoked potatoes complimented by sautéed kale and fava beans.  The lamb comes from a ranch along the Utah-Colorado border. The perfectly medium-rare chops were complimented by a Columbia Crest Cabernet Sauvignon from Washington.

The deserts balanced seasonal with traditional. A berry and peach cobbler topped with a mini-Cinnamon roll and a scoop of vanilla ice cream was a perfect summer desert. The classic, crème brulee topped with slices of strawberry, blackberry and blueberry is one of my favorites and lived up to expectations. 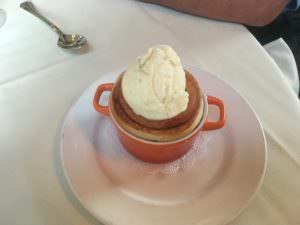 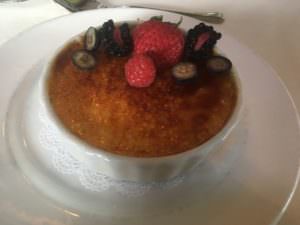 It was a wonderful meal with an attentive staff serving and clearing. What was impressive during the latter part of our meal was seeing the entire staff team swing into action when three parties showed up, including one large group that required putting three tables together. The three servers and the hostess hustled to move the tables and reset them with the silverware and the signature pewter Blue Boar plates.

Eric demonstrates that same approach in the kitchen, generally working with just one other chef and a dishwasher while they serve 50 or more guests.

Both the inn and the restaurant have consistently earned awards: Four Diamonds and Zagat’s highest rating of 26 plus the Wine Spectator’s Award of Excellence. It also had been widely recognized in statewide competitions for Utah. 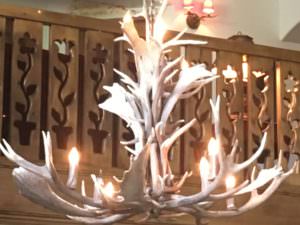 Chandelier made of horns

Incidentally, the best deal—and the menu prices are fair, particularly for the value offered—is the $29.95 prix-three Wednesday night specials. Locals pack it out—when we checked Tuesday evening there were no tables available. Chef May typically offers the soup of the day or salad, a choice of four entrees and a desert.
The location is ideal, regardless of the season. In the winter, shuttles can transport guests to three world-class ski resorts: Park City, Park City West (formerly The Canyons) and Deer Valley in about 20 minutes. In non-snow seasons, it’s a delightful drive to Deer Valley over Empire Pass or over Guardsman Pass to Big Cottonwood Canyon into Salt Lake City. And there are five golf courses, two nearly within walking distance and the third about 20 minutes away.