For years I talked myself out of the glory of playing the Pebble Beach Golf Links.

I mean, I did not want to spend that amount of money – $495 – on a course and went about convincing myself Pebble Beach had seven great holes and 11 ordinary ones.

Then I played Pebble.

Never mind the ridiculous arguments I had a made in my mind. In one round, it became very clear why Jack Nicklaus said if he had one round of golf left to play, he would play Pebble Beach.

At the risk of sounding like a teenage girl at a concert of her favorite boy band, Pebble Beach is everything imagined and then some. It is easily the most anxious I have been for a round of golf.

The design of the course is such that it really gives the golfer ample time to get into your round, enjoy spectacular holes, catch your breath and then close with two of the most iconic holes in the game.

The first and second holes are straightforward and once you get over that you are playing Pebble Beach, you settle in, much the same as during the beginning of a roller coaster ride.

The third hole – a 374-yard, par 4 – is a bit of a quirky hole with its dogleg left, but if you are playing good golf, you can be even par through three. The fourth is another par 4 where driver off the tee is not needed – 307 yards, but well bunkered.

No. 5 is a 142-yard par three that was redesigned by Nicklaus and opened for play in January of 1999. The hole sits on the bluff above Stillwater Cover and is the first in a stretch of six stunning holes.

The 6th is the legendary par 5 that plays 487 yards, but after a downhill tee shot the second is a blind shot up the hill. I crushed my drive and thanks to the imploring of my caddy, I went for the green in two and promptly sent my shot off the bluff and into Stillwater Cove! 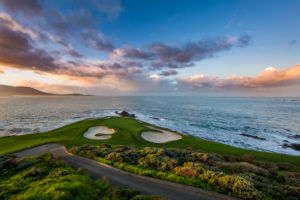 Following the beauty of standing on the 6th green comes arguably the most beautiful par 3 anywhere – No. 7. Playing only 98 yards and statistically the easiest hole on the course, club selection off the tee depends greatly on the wind. It was still the day we played the course, but I have heard stories about people playing mid-irons due to the wind in their face on the downhill tee shot.

The next hole brings a challenge both off the tee and with your second shot. No. 8 plays 400 yards, but do not hit the driver as a shot around 240 yards is optimal – much longer and your ball will be sleeping with the fishes. What comes next is the most beautiful second shot in golf.

A solid tee shot leaves you with a mid-iron from up on the bluff over the ocean and down to the smallish green that is severely sloped. Truly the most inspirational second shot you will find.

The hits keep on coming as the 9th is what I feel is the toughest hole on the course, masked in the beauty of the surroundings. The par 4 plays 460 yards and is lined the length of the hole by the ocean on the right.

The next three holes are wonderful – and potentially tough – holes, but move inland, giving you a chance to catch your breath before the tough finishing stretch.

The par 5, 14th – a 560-yard brutal test of golf – is rated as the toughest hole on the course (I’ll stick with No. 9). The dogleg right makes it a three-shot hole and you want a short approach to the tricky green, that has a tough bunker guarding the left front.

Following a short par 4 that is heavily bunkered throughout the hole, comes the three-hole finish that is as good as it gets in golf.

The 16th plays 376 yards and is arguably the best shot-makers hole on the course. There is an island bunker in the middle of the fairway that you want to make sure you carry, but at the same time, if you hit driver you run the risk running through the fairway and having to play a tough approach to a small green out of the rough.

A huge bunker guards the front of the green that is located in between the many trees that frame the green. There is also a brutally placed bunker just over the green.

Walking off the green, take a deep breath as you head to the final two holes.

The 17th is the famous par 3 that plays 170 yards, but looks like a mile from the tee. As I stood on the tee, my thoughts said there is no way you make par and, I didn’t.

This is the hole where Tom Watson chipped in from a seemingly impossible lie in the rough in the final round of the 1992 U.S. Open. There is a plaque where Watson chipped from, and yes, everyone tried a shot from there, but the rough was, well, slightly less penal.

By the time you get on the green, it’s an incredible sensory experience, both taking in the vistas from the hole, as well as what waits next.

The tee box at No. 18 is as iconic as it gets. The most famous picture of the hole is Nicklaus sitting on the fence along the tee box on the edge of the bluff in the 2000 U.S. Open, his final Open.

It’s impossible not to sit there, gaze at the ocean back to the hole and wonder what was going through Jack’s mind when the picture was taken.

The 532-yard hole curves around the ocean, making for one of the more daunting tee shots you will ever face. It’s not enough that your shot might travel over the ocean to get to the fairway, but there’s the big tree right in the middle of the fairway.

The second shot needs to go to the left to avoid an approach that deals with the tree guarding the green on the right side, but that’s easier said than done, as visually playing towards the ocean is never a comforting feeling. 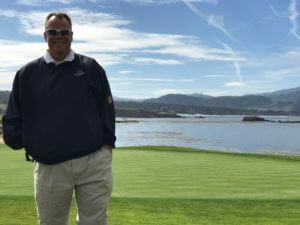 Dennis Miller at the 18th green

Additionally, there’s a bunker running along the sea wall right up to the green. When you finally putt out, take a long look at the water and take in all the beauty.

It was a joy and in many respects, a privilege to play Pebble Beach. You can share your experience with friends around the world as there are live golf cams on the first tee, as well as the 17th and 18th greens.

Of course, you could be like me and embarrass your wife like I did when I walked on to the first tee, waving to the imaginary crowd of people lining the tee box as she was watching with her co-workers.

While there initially may be sticker shock when thinking of Pebble Beach, trust me, it’s an investment into a lifetime of memories.

For more information go to ww.pebblebeach.com.